In 2013, Music Historian hosted interview articles with musicians from various genres, including the myth rock trio, Apollo Run; the collaborative that blends gangster hip-hop and bluegrass, Gangstagrass; and Christopher Seaman, the classical music conductor, just to name a few. While these subjects differed in genres and styles, they shared one commonality—they brought crowds to their performances.

I realized that it was not just enough to write about skilled instrumentalists, singer-songwriters, rappers, producers, and vocalists who had talent; I had to write about acts people perceived as special. The only metric for “special,” in my mind, would be a sold-out show. Then thought, what if I could have a hand in helping an artist put on a show that brought in a crowd of listeners?

In the summer of 2012, I had learned about the Make Music New York (MMNY) Festival-a city-wide public event which brought outdoor concerts to all five boroughs for free, all on June 21st and December 21st. That year, Avi Wisnia hosted his 6th Annual Brooklyn BBQ Block Party – a series of performances put on by bands he either knew or had met via the MMNY events. He put on a set at a Williamsburg venue called the Cyn Lounge. While it drew a lot of attention, I could not help but notice how the little alcove of a cement-paved space closed off by a tall iron fence placed a noticeable and unsettling barrier between audiences and the musical acts. I asked Avi if he wanted help in planning his next block concert for MMNY Festival 2013. I felt grateful that Avi accepted my help. In early 2013, Avi and I would start planning for the 7th Annual Brooklyn BBQ Block Party*.

Our greatest challenge was finding a venue that provided open space and located in a place where people could easily congregate. By April, Avi found Kinfolk Studio in Williamsburg, Brooklyn. I felt happy to see that the area had the type of outdoor space we had hoped for – a storefront with an open sidewalk within a neighborhood where warehouses got converted into businesses and event venues.

After getting the space came the more difficult parts: finding the musical acts, organizing the schedule, scouting volunteers to help with the merchandise table, customers, and signing-in bands who arrived 30 minutes before they went live. Being new to putting together an event of this magnitude next to a musician proved to be an educational and enjoyable experience. The greatest reward that day was watching how the mid-night hour’s closing act brought together the most massive crowd Avi had ever seen at one of his block parties.

This was the moment I decided that Music Historian needed a page called Event Diary. Avi’s block party was the first entry on that page. I had taken plenty of pictures capturing the moment of a riveting series of concerts. As of today, Event Diary has become the most visited page on Music Historian.

*To read about Avi Wisnia’s 7th Annual Brooklyn BBQ Block Party, scroll down to the bottom of the Event Diary page 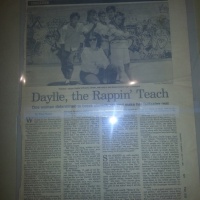