Those who follow Trumpet Grrrl – a young musician who moved from the Burtonsville, MD to New York City to achieve her dream of being a singer songwriter – will tell you her music is “fun, quirky, soulful and creative.” These adjectives also accurately describe the music video for her new single from her third album in the works, Just Listen, called “Rain Boots.”

In her music video, Trumpet Grrrl skateboards to a second-hand clothing boutique in Brooklyn with a box of her clothes. One of these items is a pair of cute girly rain boots. She trades them in for cash, and in a funny turn of multiple events, these boots get in the hands of several different owners, and somehow find their way back to our heroine.

This music video was made possible with the help of Cultured Productions. Trumpet Grrrl explains:

“The Cultured Productions team thought of the serendipitous theme, and I added my own flair with the dancers and skateboarding. The whole process took about 6 weeks from planning to release. We filmed in one day.”

As I listened to the lyrics within the song, “You only think of me when it’s raining/ pick me up while complaining/ walk right over me/ kick through the mud with me,” I wondered whether the topic of the song focused on something more than rain boots; perhaps a relationship or friendship? Trumpet Grrrl says, “During an overcast day, I left my house, and realized I left without my umbrella. “Rain Boots” spawned from the line “You only think of me when it’s raining.” I intentionally wrote the lyrics in a manner that listeners could interpret in multiple ways.”

Researching her last two albums, It All Starts Here (2012) and The Basement Tracks (2011), and a track recorded with producer Matt Shane at Converse Rubber Tracks studios called “Afghan Palace”; I sensed Trumpet Grrrl developed from a newbie on the music scene to a must-be-heard talent. So, I invited her to be this month’s interview feature on Music Historian’s Hear, Let’s Listen.

Trumpet Grrrl picked up the trumpet at the age of 10 and has been hooked since. Private lessons and summer camps served as the starting platform for her classical music training. In later years, the trumpeter would perform at Carnegie Hall and the National Symphony Orchestra on a fellowship. In 2008, she received a Bachelor’s of Music in Trumpet Performance from the University of Maryland, College Park.

“I love the beautiful sound you can get out of the trumpet,” the musician explains. “I feel I can truly express my emotions through the trumpet; I tend to fumble when it comes to words. I also have a very active brain, which is easily calmed by music. In the end, the fact that music is awesome kept me ‘hooked.’” 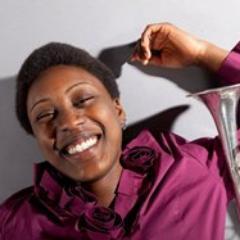 During her final months of college, Trumpet Grrrl formed the rock band La Coterie where she played keyboard, sang lead vocals and composed music. Two years later, she left the band to start her solo project. Here, she taught herself to play the trumpet and piano simultaneously.

Watch her Youtube videos, and you know Trumpet Grrrl has proven herself a multi-instrumentalist. She claims that playing two instruments and singing at once provides room for varying tonal colors and harmonic motions. The challenge is the quick change of putting down the trumpet and getting her right back on the keys, which according to the musician, can lead to a fallen trumpet. During live performances though, Trumpet Grrrl says her skills creates a “wow!” factor for the audience.

Since she went on her own, Trumpet Grrrl has written all her own songs and has developed her own style of music. “My sound is original, soulful and emotional,” explains Trumpet Grrrl. “I tend to attract fans from varying genres. Based on this I’ll say indie soul, jazz, pop rock.”

Trumpet Grrrl also claims that patience is one of the biggest lessons she learned over the past three years.

“Trying to force myself to compose never works; I have to let the song come to me. Over time, I’ve gotten better at expressing thoughts in different ways and in a concise manner. The fewer words I use to express something, the better. Additionally, I have a better feel of which chords and song structures I want when writing.”

Now, as she prepares for the completion of her third EP, Just Listen, which is set for a date in late summer or fall of this year, Trumpet Grrrl sums up the experience of making this record.

“In my first two albums, I literally did everything myself. I played all the instrumental parts, recorded on home equipment, produced it all and did my best mixing. For the first time, I will record with GRAMMY award-winning producer Scott Jacoby and have a band – a guitarist, bassist and drummer – play the songs. Scott is producing and recording; he has a great ear for little flairs and additions that can make a song pop! Recording my third album [has been] amazing.”

“Rain Boots” is just one song from Just Listen that pops. Trumpet Grrrl claims that she will release two additional songs from the EP before its official debut. The performing artist also says “while fun is the most important reason to make a music video, the primary business of creating a music video is promotion.”

Earlier in 2013, Trumpet Grrrl participated in a Twitter chat run by @GoGirlsMusic, held weekly on a Thursday, called #ggchat. Here, she inquired about companies that produced music videos and was referred to Cultured Productions. She claims the company’s investment in social media was a key decision factor.

Trumpet Grrrl’s low and sultry voice and her trumpet skills blows listener’s minds. “Rain Boots,” which Trumpet Grrrl also produced with Jacoby, is catchy, and memorable, especially as it exudes a New Orleans jazz band charm with splashes of pop and soul. Enthusiasts of indie films will find charm in her music video for “Rain Boots” as they watch how much joy someone can experience in simple pleasures while living in the complicated, urban, cluttered and fast-paced landscape of New York City. This music video is bound to brighten someone’s day.

Prior to recording songs for Just Listen, Trumpet Grrrl also wrote the cheery, experimental and gospel-imitating track “Up!” from The Basement Tracks. If listeners seek a minor-key song with a cool electric guitar solo to help drive away their daily blues or mentally travel to another place, then “Afghan Palace” will fulfill this musical and emotional need.

When I asked Trumpet Grrrl on what she hopes fans of her music take away from Just Listen, she responds, “Whatever feelings it gives the listener; I love hearing their various emotional responses and thoughts. It’s always relative to what they’ve experienced in life.

“Since moving to NYC, I have also played on subway platforms. Nothing makes my day like the reactions I get. Some [people] will start dancing, draw pictures of me, miss their trains to listen and some just stop to encourage me to follow my dreams. It really warms my heart when I get a “thank you,” and when my music is received as a gift and brightens someone’s day.

“I have written a fair amount of songs with the intention of cheering myself up and fans tell me it does the same for them. [That’s why] I named the album Just Listen because that’s all I want. I truly believe my music will [brighten] people’s day if they just listen.”

Trumpet Grrrl reminds us that consistent and constant performance, and playing an instrument or many in addition to singing, makes a good musician a memorable and well-received one. Whether the audience observing the show is passing through the subway, sitting inside a comfortable landmark performance space, or surfing on Youtube, listeners respond well to confident performers. Trumpet Grrrl finds happiness in performing, and in turn, this brings her pleasure and contributes to her development as a singer-songwriter and artist.