Like any modern day music historian, I talk about music during our generation in the 21st century. I also like to examine the role of classical music in today’s society. Although classical music is not on the top 10 list of popular genres, it is still used to educate and help young musicians, school children and professionals further their performance skills.

Northport – a New York City suburb on Long Island – is one such artistic community where classical musicians and music teachers dedicate their time to building new talent. My former classical piano teacher, Isabella Eredita-Johnson has not only developed young artists as a teacher, but she has also created an organization called Opera Night.

Since its beginning, the series grew

Since its first gathering at Café Portofino in Northport village on Friday, July 1st, 2004; Isabella and her sister, Maddalena Harris, have been inviting singers to perform arias and vocal duets on a monthly basis. They both named this gathering, Opera Night. As the series grew and began attracting larger audiences, the little café with the bistro charm couldn’t accommodate crowds.

Two years later, Opera Night relocated to St. Paul’s United Methodist Church across the street. Along with more seating space, the church provided an upright Steinway piano to accompany the singers and greater performance space. While moving to St. Paul’s greatly benefited audiences and singers, Isabella, also faced challenges. Some of them involved focusing on professional singing and musicianship while accommodating local audiences. I personally talked to Isabella about how Opera Night evolved from a monthly gathering to an actual venue, and the challenges that arose.

Isabella explained, “The caliber of the audience has grown and the presentation is now more formal than from Opera Night’s beginnings in 2004. The one thing that hasn’t changed is the spontaneity.” The performance program is determined by which singers show up that night. Isabella claims, “we do this to keep the performances fresh and exciting. After a performance, people come up to me and say, “this was the most exciting Opera Night to date!” If I had a dollar for every time I heard that, I would be very rich.”

This spontaneity helps Opera Night stand out amongst the competing performance venues that heavily rely on structure in their programming.

Another aspect of Opera Night that hasn’t changed is the immediate delivery of famous arias and duets. Isabella started Opera Night to bring the most exciting and popular parts of great operas to opera lovers instead of performing full operatic works. Some musicians might find this hodgepodge of music overwhelming, but for Isabella, it comes naturally. Isabella claims, “For me, it’s easy because good, finely trained singers have come to me. The nature of inviting 20 different singers is they will most likely sing 20 different songs.”

Focusing on the singers is fairly new general goal at Opera Night. Isabella explained, “The reasons a singer would want to sing at Opera Night are: they sing in front of a large audience; they get a free accompanist provided by Opera Night; and they increase the quality of their performances.” These benefits naturally encourage singers to spread the word about Opera Night to opera lovers and potential future Opera Night performers.

If a free accompanist and a full house is not enough to attract singers to Opera Night, the success story of some regular performers will perhaps change prospective singers’ minds.

Bruce Solomon initially had a successful singing career. However; supporting a family while performing as a concert artist was challenging. So he went into sales.

Years later, he heard about Opera Night, which helped satisfy his passion for singing and helped make up for the years he was out of the musical scene. Thanks to Opera Night, Solomon can now easily step back into singing.

In the beginning years, Frances Fascetti was an Opera Night regular. Chris Garvey, an audience member, taped and recorded all of Fascetti’s performances and distributed them on a digital music platform.

One faithful day, independent film director, David Campfield, found Fascetti’s recording of “Ave Maria.” Isabella was thrilled to hear Campfield wanted to use Fascetti’s recording in his upcoming film, Cesar & Otto’s Summer Camp Massacre. Fascetti was doubly excited to learn that out of all the “Ave Maria” tracks available for download on the worldwide web, Campfield chose hers.

Aside from helping young professionals develop their skill and performance repertoire, Opera Night reinforces the communities love for one of the most classical performing arts.

Isabella says, “Opera lovers are out there and they’re coming out of the woodwork. We see the audience turn out, and it is growing. You meet these people who love Opera and want to know if there is anywhere they can listen to it… and you tell them about Opera Night.”

The minute Isabella meets an Opera lover looking for a good performance; she puts them on the email list and sends them reminders about upcoming performances. 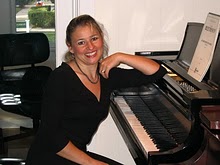 Isabella’s mother and father were the first opera lovers she ever knew. Their love of music fostered Isabella’s talent for classical piano, and soon, her years of dedication and performing eventually resulted in a degree from the Manhattan School of Music. Her greatest inspiration for opera however, was a “fine” bass/ baritone singer and enthusiastic voice teacher named Peter Maravell.

Isabella became Maravell’s piano accompanist at his studios. What Isabella thought would be a summer job that paid more than what her peers were making at McDonalds, turned into an assistantship and apprenticeship under a great singer. Maravell taught Isabella the music from the operas by some of the greats – Mozart and Puccini.

Maravell helped give Isabella a job that enhanced her experience as a concert pianist. Working under Maravell also expanded her musical world.

Isabella’s performance experience outside of academia encouraged her to teach music and take on projects and musical endeavors that would attract large audiences. For her, these projects and endeavors would revolve around opera.

As Isabella continues in her musical endeavors and projects, she is constantly reminded of the hard economic times currently affecting many opera companies – even large ones in the neighboring metropolis, New York City. Isabella has taken the initiative in promoting New York City Opera’s Chairman Challenge, a fundraiser that will help City Opera continue producing full operas. More importantly; this challenge will help New York City Opera improve their opera education and professional development programs. This is why Isabella encourages community members to take an active interest in keeping opera afloat by attending a performance; spreading the word about a company; or donating.

Tonight’s celebration of Opera Night’s 7th year in Northport will remind community members of how much people love Opera. People want to have it and need to have it. “And for a good reason too,” Isabella says, “it is just wonderful!”