College Music Journal Marathon, the largest and longest-running music industry event of its kind, dominated the performance scene in Manhattan and Brooklyn this past week. Up and coming bands on the independent music scene, were the focal point of this massive 5-day city-wide festival. CMJ traditionally attracts college students, young professionals from all walks of life and members of the music industry and press. As a young professional and a ringer in today’s “new music” scene, I was sucked into CMJ and now, I have a new happy concert memory. 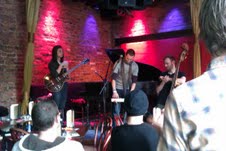 (From left to right) Toru, Avi, and Gil

My CMJ celebration started at Rockwood Music Hall in New York City last Friday afternoon. I came to this rustic, cozy and bohemian bar to see Avi Wisnia – an artist from the independent record label, MPress Records. Although they’re a new band, Avi Wisnia blends musical elements common in older genres like the blues and 1950’s west-coast jazz. The song “Rabbit Hole” is an ode to the 12 bar blues style and American jazz.

The acoustic bassist, Gil Smuskowitz, opens “Rabbit Hole” with a syncopated melody; which is repeatedly improvised on both the piano and guitar throughout the entire song. “Rabbit Hole” also makes a great anthem for those cold and nippy autumn days. Avi sings you know it’s a good thing we’re in here it’s starting to pour/… we’re in these close quarters but somehow we’ll make due/ well it looks like I’m stuck in this rabbit hole with you.

This funny song of young and foolish love will warm your insides, especially when you’re consuming your favorite cocktail. On the other hand, “Something New” – the title track on the band’s newest album – is far more riveting and upbeat. 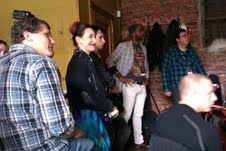 “Something New” quotes 4 different songs: “Smooth Operator” (Sade); “Eleanor Rigby” (The Beatles), “I Will Survive” (Gloria Gaynor), and “Pumped-up Kicks” (Foster The People). “Something New” was the perfect ending to Avi Wisnia’s set. Everyone in the audience, including myself, was curious about the singer’s next improvisational surprise but before we all knew it, the song was over. “Something New” is the single on Avi Wisnia’s newest album, which is now available on iTunes.

That night, I came to a larger performance space, NYU’s Webster Hall. Here, the experimental electronic group, Purity Ring opened the 7pm line up. Purity Ring’s sound is undefined; their songs chill me to the core. Though the band is a duo; they together created a performance of theatrical proportions. Singer, Megan James and sythesizer player and automator, Josh Kolenik stole the show.

Nobody in the audience ever saw James’s and Kolenik’s faces, only their silhouettes, which were outlined by flashes of colored lights. James and Kolenik purposely programmed these lights to flash along with the 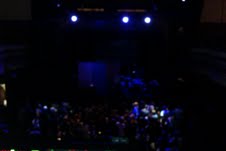 down beats in their songs. In addition to an eccentric lighting effect, Purity Ring’s clever use of automated and synthesized rhythms and incomprehensible sounds in tracks like “Belispeak” and “Ungirthed” transcended listeners to a deep dark abyss of nonsensical musical ambiance. Purity Ring’s performance was out of this world!

On Saturday, I took the L train to Bedford Avenue in Brooklyn to a pub called Spike Hill. Here, music video distributor, BaebleMusic lined up bands to perform throughout the day and evening. One of the first artists in the line-up included the up and coming singer-songwriting duo from England, Emmy the Great.

Emma Moss and Euan Hinshelwood tune up at Spike Hill

Emma-Lee Moss sings beautifully with a clear and crisp pronunciation. The one track in which she exhibits this vocal skill is “Paper Forest” – a song that celebrates living in the moment, whether it be joyful or somber. In this song’s last verse, Emma sings, Oh come and we will celebrate the things that make us real/ the things that break us open and the things that make us feel/ like these accidental meetings and the partings of our ways/ that are not so much our choice but in the blood that we are made… . Those who gathered at Spike Hill to hear Emmy the Great were hooked by Emma’s bold and poetic storytelling.

Select 5-7 bands each day, and personally chat with them!

One can describe CMJ Marathon as a cornucopia of new music; but the abundance of bands and performance venues can be overwhelming for first timers. If you plan on attending the next CMJ, I suggest you research a few bands you’d really like to see and, if time permits, select 5-7 for each day. Unless you are Hermoine Granger from Harry Potter, there is no way you can attend every CMJ concert; so take your time in deciding!

I also discovered CMJ is an intimate festival where attendees are in close physical proximity of every band. In addition, bands are excited to talk about their music with attendees, and I can attest that every musician I met at CMJ was welcoming and open to conversation. I look forward to continuing my conversations with a few of them. I hope to learn as much as possible and I can’t wait to record and share these conversations with readers right here on Music Historian’s Hear; Don’t Listen. 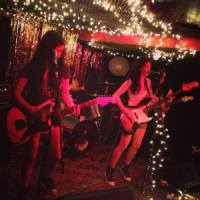